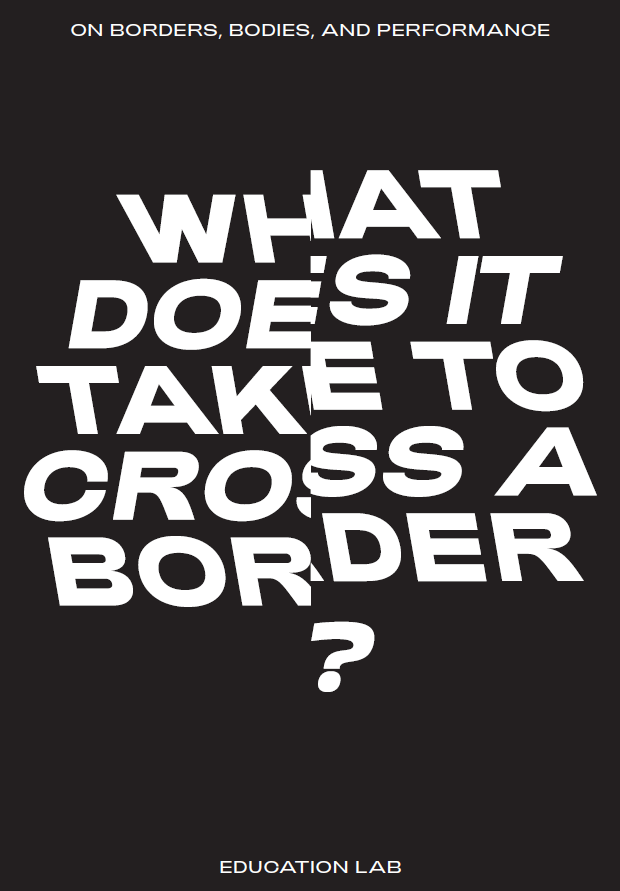 What does it mean, and what does it take, to cross a border? How do we experience borders, both spatially and physically – on an everyday basis and when we leave familiar terrain? Which actions and movements do we associate with borders?

The ifa-Galerie Berlin presents a four-day event programme addressing the experience of borders from the perspective of bodies. Through a series of performances, original artistic contributions and workshops, a group of international artists will ask participants to examine how borders are created, engendered and negotiated by physical, choreographic and sensory strategies and processes, but also how we can understand and redefine them through physical experience. The programme will be complemented by talks and conversational formats.
In the accompanying Education Lab, pupils from the Bettina-von-Arnim High School in Reinickendorf will explore borders within the context of the school: Which patterns of movement are encoded in the realm of the school? Which actions, behaviours and structures influence physical experiences? Is there room for manoeuvre? Which paths do these invisible borders follow? And can they be redrawn?

All performances are free of charge and open to everyone – first come, first served.
An accompanying reader will be available in the ifa-Galerie Berlin.
Workshop spaces are limited, please register for the workshops with Anne Juren, QUARTO, deufert&plischke and Farah Saleh via: Ev Fischer at ifa-Galerie Berlin, email fischer@ifa.de, tel. 030 28559157

Additional information as well as the detailed programme can be found at: https://www.ifa.de/en/what-does-it-take/

Anne Juren: The Lesson on the Skin
(performance – new work for the ifa-Galerie Berlin)
Friday, 22 February, 8–9pm
Saturday, 23 February 6.30–7.30pm
Sunday, 24 February, 2–3pm
Over the past few years, Anne Juren has been presenting the series Fantasmical Anatomy in which she expands the imagination of the body and its boundaries through a proposed textual language. Incorporating poetic, fantastical, speculative and imaginative dimensions, she places choreography inside the body of the spectator. Each choreographic lesson exposes a different body part, opening up our individual and collective desires through voice, writing, hearing, sensorial embodiment, corporeal practices and dance. By investigating the meaning, significance and materiality of the skin, The Lesson on the Skin, developed for ifa-Galerie Berlin, takes the skin as an entity in itself, a point of departure for thinking and sensing the limits and openings of the body.

Anne Juren: Plastering the Body
(workshop)
Saturday, 23 February, 11am–2pm
This workshop will explore different somatic body practices (such as the Feldenkrais method) that choreographer Anne Juren uses in her research on Fantasmical Anatomy in order to explore the relation between body functions, body images, dance and choreography. In this workshop, we will work with the idea of the skin as a boundary-object and surface, and explore the practice of plastering as an artistic strategy to rethink how we experience the body, its contours and its boundaries. Participants are asked to bring comfortable clothes and a towel.

deufert&plischke with Kike García Gil: spinnen
(performative installation – new version for the ifa-Galerie Berlin)
Friday, 22 February, from 2pm onwards
Saturday, 23 February, from 2pm onwards
Sunday, 24 February, from 3pm onwards
In spinnen, deufert&plischke in collaboration with the Spanish embroidery artist Kike García Gil, will create a workshop in which visitors can come into contact with the production methods of the mythical figure Arachne. Arachne is a figure marked by exclusion, ostracization and transformation who was turned into a spider for her hyper-realistic depictions of violence against women in society. Her art was censored, and she was only able to continue her practice of “weaving” after being turned into a creature. Arachne’s workshop is a space for collectively experiencing the social and artistic forms that are increasingly disappearing from our society: analogue communication, manual work, physical contact. Everyone is welcome to come and spin with us!

deufert&plischke with Kike García Gil: spinnen
(Workshop)
Friday, 22 February, 11am–1pm
In their workshop, the artist duo deufert&plischke introduces the figure and the working method of Arachne: a figure that its marked by exclusion, isolation and metamorphose and that has been sanctioned for her hyper-realistic representations of violence against women and consequently been transformed into a spider. Arachne’s art of weaving ventures an important border crossing by opening up to society: in the act of weaving, society is practiced; at the same time, it appears in all its violence, diversity, and humanity in the fabric that is produced. The workshop addresses everyone who is interested in arachnid, feminist and communicative practices: in talking with each other, in writing to each other, in weaving and spinning collectively.

deufert&plischke: Knotting Choreographies
(choreographic workshop)
Sunday, 24 February, 4–5pm (no registration needed)
In the framework of their performative installation spinnen, deufert&plischke invite the audience to take part in a choreographic workshop. Together we will write down some algorithmic rules and transfer them into space by walking and looking at each other. The words keep us together like imaginary threads and make us move not next to but through one another, building collective knots by temporal alliances, stumbling, hesitation or smiles.

Farah Saleh: Gesturing Refugees
(performance)
Sunday, 24 February, 6–7pm
This interactive video and dance-performance intends to archive latent stories of refugeehood using the bodies of refugee artists and the audience as the main archive, while playing with other archive material, testimonies and imagination. The alternative archive includes present, past and even future stories of refugeehood to try and interrogate collective responsibility and find bridges between the past and present. By re-enacting, transforming and deforming hidden and personal memories of refugees by refugee artists, the performance allows the re-appropriation of the narrative of refugeehood and the development of a collective gestural identity that might challenge that of passive victimhood to which refugees are often subjected. The creation process of the piece has already faced many obstacles related to the visa denial of artists and the impossibility of their physical encounter, which has added formal and political layers to the performance.
Concept and choreography: Farah Saleh.
In collaboration with the artists: Hamza Damra, Farah Saleh, Pedro Simoes and Fadi Waked.
Videos: Owa Barua, Shadi Jaber and Pedro Simoes. Dramaturg: Luke Pell.
Funded by Creative Scotland and Cultural Resource.
Supported by Dance Base.
Special thanks to Ossama Halal, Bush Hartshorn, Claricia Kruithof, Nicola Perugini, Husam Rabeh, Ana Rodriguez, Emil Perugini Saleh.

Farah Saleh: Archiving Gestures
(workshop)
Saturday, 23 February, 3–6pm
Farah Saleh will share her ongoing artistic research on the archive of gestures with the art community in Berlin. The workshop will investigate how individuals can contribute to change through exploring social and political memories, using the body as an archive. By re-enacting, transforming and deforming gestures in different creative ways, it will experiment with ways of archiving gestures and personal alternative narratives that are omitted from official narratives.

QUARTO: THISENTANGLEMENT
(performance)
Thursday, 21 February, 6–8pm
This piece – two bodies captured in 1000 metres of black rope – unfolded from a previous performance called KNOT BODY. The work navigates the transitional space that trespasses the object/subject divide through an ongoing metamorphose of a massive black thread: a pile of it becomes a lasso, a whip, a snake, and then a huge knot, a multidimensional pattern, an accidental spatial ornament, a labyrinth, a sprawling mass entwining, hiding, revealing, becoming the bodies that it connects and divides. In the process, spaces between conventional binaries of gender (male/female) and substance (presence/absence) are revealed and inhabited. The blackness of the rope in the obscurity of the space contrasted with the skin of the naked bodies invokes an animistic ritual, one which seems to imbue a utilitarian object with kinetic energy, awakening its own inner life.
THISENTANGLEMENT is an independent continuation of QUARTO’s performances Knot Body, Beauty of Accident and Durational Rope. Each part in the ROPE-series deals with the 1000 metre-long rope in distinct ways. Beauty of Accident, the first part of the series, explored the rope’s flux and continuous movement; it unfolded into a durational piece (Durational Rope) and a video piece (ROPE#1). In the second part, KNOT BODY, the stage performance deals with the rope as a knot/mass/body and has also developed into a video piece (ROPE#2), leading us to the current piece THISENTANGLEMENT.
Choreography, concept and performance: QUARTO (Anna af Sillén de Mesquita and Leandro Zappala).
Dramaturg: Igor Dobricic.
Curator: Camilla Carlberg, Moderna Museet.
Distribution: Koen Vanhove and Julia Asperska from Key Performance.
Co-produced by Moderna Museet and MDT.
Supported by: The Swedish Arts Council, Stockholm’s Culture Committee, The Stockholm County Council and The Swedish Arts Grants Committee.

QUARTO: Communal Rope
(workshop)
Friday, 22 February, 4–7pm
In this workshop, we will share some of the work and practices that we have developed in the context of the ROPE-series over the last ten years. We will be dealing with the rope as an emblem, as a riddle and a problem, collectively encountering its qualities and dealing with its entanglements. These are some of the questions we will be exploring together: How do you untie a huge knot collectively? What happens with the limits between bodies and objects when dealing with a very long rope? Please bring comfortable clothing.

Mischa Leinkauf and Sandra Noeth: Two lectures and a dialogue
Saturday, 23 February, 8pm
Borders and liminal experiences are at the core of both, Mischa Leinkauf’s artistic and filmic projects as well as Sandra Noeth’s curatorial and scientific work. Grounded in two short lectures that introduce their respective working practices and contexts, the dialogue focuses on the intersections of aesthetics, politics, ethics and law in dealing with borders: how to understand borders in their constructedness and performativity, and how to challenge them by artistic and discursive means?

Artists Talk
Sunday, 24 February, 7.30pm
Concluding What does it take to cross a border?, the participating artists gather for a final exchange. Taking the choreographic and performative strategies that they developed in their artwork as a starting point, the discussion evolves around a critical reflection of the agency of artistic practice and aesthetic experience in light of real social and political experiences of the border.