1989 is an event of worldwide importance. The end of the system struggle between East and West seemed to usher in the “end of history” for many, a world situation in which there was no longer an intellectual alternative to Western universalism. Freedom, equality and fraternity for all. But who still hears it, the triumph call of the self-conscious awareness of liberty? It has long been silenced by history. The limitation of European memory to liberation from totalitarianism could no longer be sustained. The literatures already drew a more complex picture of the present, in which they not only showed a world of the simultaneity of the different, but also impressively expressed the structural and psychological afterlife of colonialism in the centers of imperial power.

It is no coincidence that precisely in the year of the fall of the Berlin Wall a standard work of post-colonial theory appeared, which brought this dynamic to the point in the title: The Empire Writes Back (London 1989). Today, the memory of the fact that Western modernism has made its ideals implausible by the own claims of domination, is still a stark reminder: the world loses its borders in the wildfires of violence. The same borders imperial powers have imposed within the Congo Conference in Berlin (1884/85) or by the Sykes-Picot Agreement (1916).

Whether the West wants this to be true or not, its universal claim to validity is significantly delegitimized by the dialectics of modernity, especially the crimes of colonialism and the exploitation of man and nature. Today, we are living in the world of prospering relativistic conceptions of culture, which contrast with the ideals of modernity since these are regarded as corrupted concepts of Western hegemony. In many societies of the West itself, the notion of the universality of man is now questioned again, freedom is again the freedom to superiority and (national) isolation. Yet, despite all protectionist rhetoric, the factual, that is, human, procedural, material, and medial connections are increasing in our developing world society. Thus, the interactions of the societies conflict with allegations of “own”, national or ethnically understood identities, which are directed against the universal claim of modernity.

In order to organize and legitimize global justice and to shape societies on a human scale at local levels with specific needs, there is hardly anything more urgent than the genesis of a new world consciousness that makes ethical and institutional standards justifiable for the world society. But how can a new consciousness of universality be understood that is not based solely on European universalism?

One of the most important theoretical labs that recognized this problem at an early stage is the Caribbean network of Créolité philosophers, created around Aimé and Suzanne Césaire and their remarks of the Négritude movement. Its most important representative was writer, literary theorist and philosopher Édouard Glissant who both lived in Martinique and Paris, and who had proposed a Poetic of Diversity (Introduction à une poétique du divers, 1996) for a life in a world of chaos.

For Glissant, societies develop in the form of narratives that shape the self-understanding and the rules of coexistence. Therefore Glissant interprets the great reference texts of cultural collectives as an expression of a world consciousness: in them the world is presented in a specific form, which can be strengthened into social reality. Here, Glissant explicitly takes up Hegel’s aesthetic: for him the great epic texts  Hegel’ s “Grundbücher”- on which the European culture is based – the Old Testament, Ilias and Odyssey, the Aeneis or the Divina Commedia – are stories of community formation and thus the establishment of Eurocentric order.

For Glissant, the results of this are great narratives of the world, world poetics, which aim at reducing complexity, unification and totalization. The most powerful expression of this systematic thought was, in the nineteenth century, at the height of the European conquest and approximation of the world, Hegel’s philosophy of history itself. Glissant reads it as a great narrative of the rise of European reason. Interesting in his point of view is that he interprets these great narrations not as a triumphant gesture by Europe but as an expression of anxiety on the other, which has produced obsessive longing for rootedness, purity, monolingualism and supremacy which repeatedly in history lead to hierarchization and exclusion, even to violence and genocide.

Glissant calls this world consciousness a “continental”, because it functions through self-reference and demarcation. In contrast, he formulates what he calls an “archipelagic thinking”. This is a thinking of the manifold and permanent reference, which does not systematically delimit, divide and differentiate cultural differences but rather to see sees it as a constant exchange and mixing process. Everything is related to everything and must always be thought of in this diversity – just as the boat lines of the Caribbean archipelago create a network of exchanges. Here one understands how Glissant sees culture and reality connected in narration, how European and Caribbean experiences interweave in Glissant’s thought.

In his Philosophy of Relation (Philosophie de la Relation, 2009), Édouard Glissant describes the challenge of such a world understanding, which must acknowledge that it can never fully grasp the “all-world” in its multifaceted totality. An “archipelagic culture” thus tries to cope with unpredictability, incompatibility, and non-simultaneity, without intentionally directing the world according to a model, and physically shaping it. Just as an archipelago is an island world only in the totality of all the island’s belongings, everything exists simultaneously and must be considered equally (at the same time). But since the multiplicity of the phenomena can no longer be systematized, for example, under the vicious criterion of modernity (modern/not-modern), we live in “fragmented worlds”, in a time of permanent chocs and conflicts, of dislikes and attractions, of secret agreements and opposites alike  briefly, in a “chaos world”. If the reaction to this is not to be demarcation and violence, Glissant advises that the tensions should be withstand, and an awareness of the possibility and openness for the unpredictable should be developed. The new universal consciousness is thus expressed in a complex narrative of relations (Poétique de la relation, 1999).

Glissant’s aesthetic, his understanding of a self-narrating world-multiplicity, is thus the attempt of a philosophy of history, which in the “chaos-world” wants to grasp a new consciousness and turn it to itself. It is like Hegel’s project, which at the same time, it tries to turn it upside down. Against the postulated unity of the reason, Glissant represents an awareness of all beings. Each form of life develops its own narrative of itself, and is related to the other narratives of community, but without being completely transparent, that is, to be completely comprehensible to the others. The goal of history is thus a consciousness of absolute openness, in which everything occurs, everything is conceivable, everything is alive. To create such a world-consciousness is for Glissant the task of contemporary literature. It can create models for social narratives in a broader sense, which can unfold an infinite complexity in a multilingual manner without hierarchically arranging the complexities of references, attitudes and life models.

Is it, however, in such a consciousness of the world possible, that one does not acknowledge the other, subjugates one society to the other, as Western modernity has done with practically the entire world? Glissant himself saw the fundamental problem of such a philosophy of history. What about “narratives” of the offensive isolation and violence? What prevents them from becoming dominating? In what name can their brutality be rejected? How should we act when collectives take their form of life as the sole or universal measure of politics, subjugate other people, and disregard diversity?

The answer that Glissant gives to this is that of self-modesty, arising from a changed world-consciousness. The only possibility of global co-operation now lies in the awareness of the individual of its own, particular position in an “all-world”. Everyone has to internalize the indifference of the world, that is, the fact that no one has a measure of judgment. In the sense of a poetics of multiplicity, all must adhere to the rules of permanent reference in order to maintain their own way of life. The problems of such non-normative ethics are obvious. What if someone does not stick to it? We are confronted with the problem which Albrecht Koschorke, a narrative theorist, firmly pointed out: “Like thinking and speaking in general, the narrative does not have a sufficient intrinsic sign of truth.” In concrete terms, the multiplicity of narrations as a principle cannot be a universal horizon, which can possibly regulate the interplay of diverse human narratives.

Glissant’s idea of an “archipelagic global thought” was an important and essential contribution in a time when a “fight of cultures” has been declared the new leading maxim. It insists on the right and the possibility of the plurality of forms of life. It shows that a world that grows together and remains different is also an impertinence, which we can no longer encounter with an outdated obsession with concepts such as center and periphery, order and chaos. Opposing lifestyles reside door to door.

After the Second World War, especially in the German Federal Republican society the impression was made that one lives outside the chaos world. Now that war-driven violence, which is essentially the result of the structures of imperial modernism, is approaching the Europeans, as the stories of fugitives massively testify, this narrative is definitely absurd. However, the freedom of military violence is not only claimable to Europe, it also accounts beyond the own concerns. In order to sanction martial violence and to organize justice on a global scale, a planetary horizon after European universalism must be conceived, which makes action possible and asserts the same rights globally. Such a universality can no longer be postulated by a center, as the European universalism, subsumed by Hegel, did, but must emerge from concrete contexts and be embodied in these, whose right of existence and complexity Glissant justly emphasized. How this new universality, which no longer abstracts from diversity, can be conceived is still to be told. The French philosopher Étienne Balibar has proposed the concept of “multiverse”. In any case, the “we” in a world society must be more than the sum of our different lifestyles if we do not want to accept the cynical position of the spectator.

Markus Messling has been Deputy Director of the Center Marc Bloch since June 2015. PhD in Romance Philology at Freie Universität Berlin 2007; Habilitation at the University of Potsdam 20 15 (Venia legendi for Romanische Philologie und Allgemeine und Vergleichende Literaturwissenschaft). He was project manager for science and research at the ZEIT Foundation Ebelin and Gerd Bucerius in Hamburg (2007/2008) and DAAD / MSH postdoctoral student at the École des Hautes Études en Sciences Sociales (EHESS) Paris (2008/2009). From 2009 to 2014 he was head of the Emmy Noether junior research group “Philology and Racism in the 19th Century” at the University of Potsdam (German Research Association). Since 2011, he has also been the spokesman (in collaboration with the Collège International de Philosophie Paris), the international research group “Transmed! Thinking of Méditerranée and European Consciousness” (DFJW). His work has been awarded the Tiburtius Prize of the Berlin Universities for outstanding dissertations as well as the Brandenburg Science Prize for Young Scientists. Markus Messling is a member of the Quorum of “Future Philology, Revisiting the Canons of Textual Scholarship”, the founder of Philological Encounters (Leiden, Boston: Brill) and editor of the magazine for the history of ideas (Munich: CH Beck) . He was a Fellow of the School of Advanced Study at the University of London (2014), Visiting Scholar at the University of Cambridge and Wolfson College (2014), as well as guest professor at EHESS Paris (2011, 2015) and Kobe University in Japan (2016). 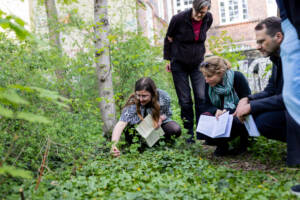